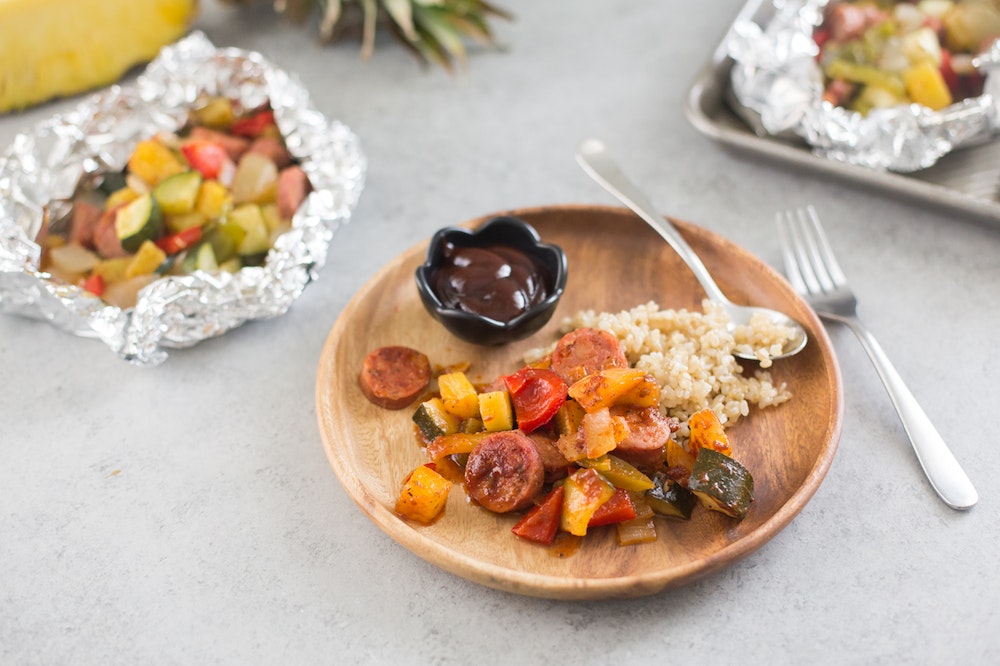 Sweet and savory, pineapple and BBQ sauce give these foil packet meals a Hawaiian vibe.
Smarts #1: The packets can be fully assembled and sealed up to a day ahead of time. Store them on a sheet pan to catch any liquid that might leak out.
Smarts #2: Since the packets are sealed as they cook, the flavor doesn't change much whether cooked in the oven or on the grill. Choose whichever cooking method is easiest.
Smarts: Since paleo BBQ sauces are widely available, we're leaving BBQ sauce on the grocery list here. Just make sure whichever brand you use is compliant with your needs.
Tags
Make Ahead, Grill Friendly
Proteins
Sausage
Cuisines
American
Save recipe
81

Easy to prepare and easy clean up. I made this in a Dutch oven.

Loved how customizable this is for each kids preferences but knocked a star off for cook time. Took a fair amount longer to cook veggies than expected.

Excellent! Cooked in the air fryer, this dish made my house smell delicious all night.

I made this in a Dutch oven instead of foil packets, and I used canned pineapple. I topped it with roasted cashews for crunch. I thought it was delicious! It was also very colorful and pleasing to look at.

Made this several times and love it! I usually just put the peppers and onions in a skillet and then the sausage, then finally the pineapple and BBQ sauce. I used Andouille sausage, which gives it a little kick. Update: made with farro and that was good, too. Might try diced potatoes next time. And used an andouille smoked pork sausage which was great.